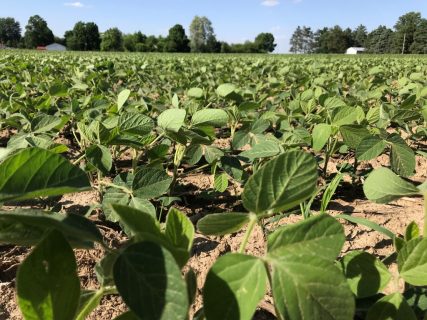 Around Indiana there are some trouble spots for the corn and soybean crops, but overall 2018 has been off to the races. Purdue Extension soybean specialist Shaun Casteel said the year has been a fun one in a lot of areas following the uncertainty that April snows brought.

“From what I can tell we’ve had pretty good stand establishment from north to south,” he told HAT. “We have had some dry pockets starting to creep in. If you look at the southwest there are some abnormally dry areas, and if you want to switch back up to the northwest, there have been some areas that have just been too wet to get much in.”

So, there are haves and have nots around the state, but on average planting was very timely once the warm up started and soils dried out.

“We’ve got beans that are really trucking along, already have first and second trifoliates just finishing up the month of May. So, looking might fine.”

Casteel cautions farmers who made weed control applications amid the warm temperatures to be vigilent and check back on those fields. The heat might have minimized spray effectiveness.

“If you’re able to get a good spray on but it’s been 90+ degrees for four or five days and they’re starting to dry out a little bit, or you tried a late afternoon application, sometimes those weeds are hardy enough and they’re not going to take up that herbicide quite as well. So, the kill might be a little tougher. As you look at that, let’s make sure we get good weed control and note when those applications were made if you were on that front end of some of these early post applications.”

He said there have been very few calls about whether or not to replant. That is nowhere close to the issue that it was one year ago.

Listen to the complete HAT interview:Shaun-Casteel-May-31-2018