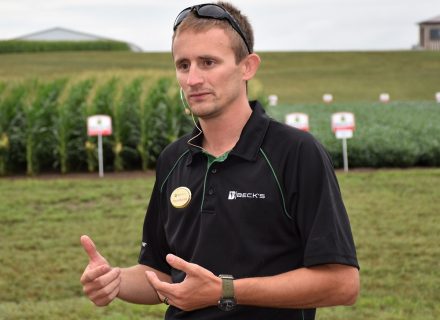 Immature crops could be the theme of last week’s crop tour, and of course Indiana falls in that category after the extreme late planting season. Predicting yield potential right now is very difficult, even though we asked field agronomist Travis Burnett to do just that at Becknology Days last week. He covers the state north of I70.

“There’s never been this much late planted corn before, but if you were to go out and what I’m seeing in the fields, the kernel count is there,” Burnett said. “We had really good pollination weather and if you were to look at ears and do traditional yield estimations based off the kernel count, it looks like we have a pretty crop good out there. The problem is we don’t know how many kernels it’s going to take to make a bushel this year. Typically, we use 80,000 kernels per bushel. I’m guessing and my gut tells me it’s going to be somewhere between 90 and 100,000, so that’s going to bring the top end out of it a little. New territory.”

He told HAT crops look worse as you go east, and more specifically east of I69.

“The heavier soils over there are less forgiving and they caught more rain, so planting was delayed even further there compared to other portions of the state. But, overall it’s very uneven and it’s very dependent on where you’re at and the drainage of your particular soils.”

Everyone is concerned about frost coming too early during this late season, and Burnett is also concerned about the potential of “some stalk rot issues, sustainability or harvestability issues just because of the wet weather we had early. There’s a significant amount of crown rot out there that’s going to lead into some standability issues later in the year, so it’s something we need to keep top of mind and create harvest schedules. Prioritize which fields we get to first based off of condition of the stalks in particular.”

Samantha Miller, a Beck’s agronomy information specialist, gave an update on growing degree units. At their plot in Atlanta, Indiana, the corn field was about 700 units short as of August 20th. What is the ideal weather to get the corn crop finished on time? 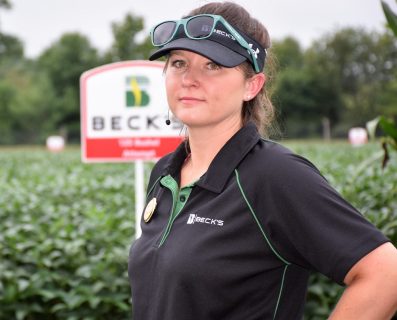 “We need to get as many solar units as we possibly can from these shorter day lengths,” she said, “so if we could have 80 degrees during the day, 60 degrees at night. We don’t want to waste any energy metabolizing at nighttime with high nighttime temperatures, so we want 80 during the day, 60 at night, blue bird skies, and we’re going to make it.”

Miller is confident it will happen based on historical first frost averages and the hope of that ideal weather. Hear the calculations here:Samantha-Miller-GDU-update