Many Ranchers Wiped out as Wildfires Race Across Western States 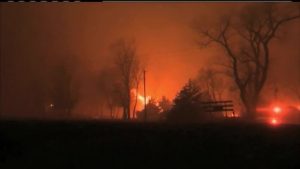 Hundreds of thousands of acres of pastureland have been burned as wildfires roll across Kansas, Oklahoma, Texas, and Colorado. High winds have made the fires hard to control. Losses by ranchers are staggering. Scarlett Hagins, with the Kansas Livestock Association, says many livestock operations are being burned to the ground, “There are currently 9 counties in Kansas with active wildfires, and there may be even more that are not yet reported.”   At least 600 square miles, mostly in Clark County, have burned in Kansas as powerful wind gusts have fanned the flames. There are reports of significant cattle losses as entire ranches were engulfed.

A wildfire near Amarillo, TX, killed three people trying to save cattle. “I was disking trying to get a fire guard, and I had less than three minutes,” said David Boseldon, a rancher. “That wind was blowing 60 [miles an hour] or more. I was lucky. I got in my pickup and was able to get out of there. Just that quick, everything is engulfed.”

In Oklahoma, the Governor’s office says 300,000 acres in three counties alone have burned. The largest of the fires spread from the Oklahoma Panhandle into southwest Kansas, and has consumed more than 800,000 acres of prime grassland. Todd Domer, of the Kansas Livestock Association, says the losses have been devastating. “Those in the hardest-hit areas have lost a considerable amount of fence, forage resources, harvested feed in terms of hay, and really an undetermined number of cattle at this point,” he stated. “And in addition to losing their livelihood in many of these cases, they’ve also lost their homes, outbuildings, and equipment.”

KLA has set up a special web site to coordinate donations of hay and fence material, “The immediate need is hay, we are trying to get hay to the areas that need it,” said Hagins.  That web site is: https://www.kla.org/donationform.aspx

Hagins says the Colorado Farm Bureau, Oklahoma Cattlemen’s Association and the Texas and Southwestern Cattle Raisers Association all have funds for their respective states.

U.S. Senator Pat Roberts (R-KS), Chairman of the Senate Agriculture Committee, took the Senate floor on Monday to speak on the “historical and unprecedented wildfires” that struck southwest Kansas last week. Roberts toured the damaged areas this past weekend. “We have unimaginable damage to land and property, but also heart-wrenching scenes of cattle and wildlife burned, wounded, and wandering,” said Roberts. “On Friday, I drove south from Dodge City through range and ranchland I didn’t recognize. What used to be gently rolling prairie dotted with herds of cattle and crisscrossed by fencing is now reduced to blackened dust.” Roberts also asked the Trump Administration to quickly approve a federal disaster declaration. Following a conversation with Vice President Mike Pence last week, Roberts said he expected a disaster declaration within five days.

Oklahoma, Texas, Kansas, and New Mexico have asked for a temporary suspension of grazing restrictions for farmers and ranchers. In a letter to acting Agriculture Secretary Mike Young, governors from the four states ask that the restrictions in the Conservation Reserve Program be lifted to provide more land for grazing. Federal programs providing aid in disasters such as wildfires include the Emergency Conservation Program, the Livestock Indemnity Program, the Environmental Quality Incentives Program, Emergency Assistance for Livestock Program, and crop insurance.