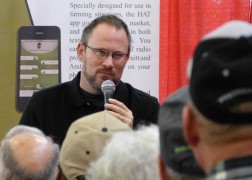 Remember spring of 2015 and the rainfall that just wouldn’t quit? It was catastrophic for some Indiana farmers, most notably in the northeast. HAT chief meteorologist Ryan Martin is talking 2016 weather now, and the big question is will there be a repeat in the spring of the coming year.

“The way I see it right now, no, but I will also put this out just for full disclosure. I did not see the catastrophic level that things happened in 2015 either,” he said. “My model missed that completely and I didn’t believe we could go to the level we did. The record rainfall we saw in May, June, over parts of northeast Indiana, anybody who says that they called that is ridiculous. So we didn’t see it then either, but for right now there are no markers out there that tell us we need to be concerned about anything like that.”

Martin says Indiana’s winter will not see the unusual warmth we’ve had so far in December. It will be colder although January looks to be slightly above normal and precipitation levels normal to slightly above. February could be colder and dryer than normal and March, as we get closer to planting, might be above normal on temperatures. Planting season itself?

“April looks cooler and a little bit wetter,” Martin says, “and then I think we’ve got some very good precipitation coming in May so to me as the spring rolls around it’s one of those scenarios where if we can get the crops in the ground on time or where we would like to in April, and dodge some of that colder air, we should get some decent rains on top of it in May to really get that crop to pop.”

Summer should get another pleasant start temperature-wise until above normal conditions hit during August.

“On precipitation I’m liking a below normal stretch of moisture for the June-July timeframe, but then getting more moisture in during August.”

But, Martin’s models are preliminary and much could change. The good news though is no calamities appear in those 2016 models.