United States Secretary of the Treasury Steven Mnuchin, the lead negotiator in trade talks with China, told “Fox News Sunday”, “We have agreed to put the tariffs on hold while we try to execute the framework.”

In a joint statement released over the weekend, the United States and China say they are making progress in negotiations, and China has pledged to “significantly increase” purchases of U.S. products, though the statement did not specify what products.

So, what’s the next step, and what can this mean for agriculture? Mnuchin says, “We are immediately going to follow this up with (Commerce) Secretary (Wilbur) Ross going there with very hard commitments in agriculture where we expect to see a very big increase, 35 to 40 percent increases in agriculture, this year alone.”

President Trump tweeted yesterday morning, “Under our potential deal with China, they will purchase from our Great American Farmers practically as much as our Farmers can produce.” USDA Under Secretary for Trade and Foreign Agricultural Affairs Ted McKinney, speaking from an ag trade mission in Southern China, responded to Trump’s tweet. 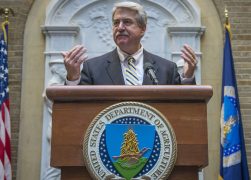 “We’ll take that as a challenge and see how the discussions go. I do not want people to get overly excited. I think we should be very cautiously optimistic. I’ll remind people that we’ve seen this before, and that sometimes the excitement generates benefits and realities, and sometimes it does not. And so, until we get through next week, or perhaps following weeks, it may take 2 or 3 rounds of this, I’m going to refrain from saying any more than I’m cautiously optimistic. I do like the tweet, though.”