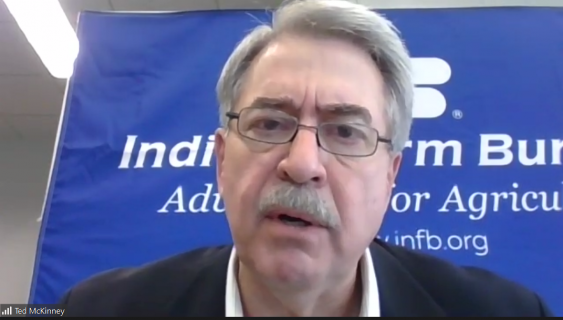 Purchases from China have ramped up in recent weeks as they continue toward their lofty goal of buying U.S. ag goods. Indiana native and USDA Under Secretary Ted McKinney discussed China during a virtual roundtable with Indiana producers and commodity organization representatives on Wednesday hosted by Indiana Farm Bureau.

“They still have time to make their goal and make the purchase amounts that they had committed to very, very publicly. Right now, that’s what the U.S. government is expecting, certainly hoping. We’ll have to see what happens at the end of the day. I can just tell you I’m very pleased that they did step up. Many people, if you recall, were of the view that they wouldn’t do it and they have.”

I asked McKinney if the US would be lenient in their dealings with China if they don’t meet their Phase One commitments this year because of COVID-19.

“COVID there and then subsequently COVID here and all the logistical issues like containers finding themselves too much on one side of the world than the other, probably did hurt us. But I’m not ready to give up on the fact that a commitment was made very, very publicly for $36.5 billion. If they fall short, well we’ll deal with that at the time, but right now I’ll be in the category of saying ‘thank you’ for at least attempting to honor the commitment. We’ve still got some ethanol and fruits and vegetables on top of the other products that they could buy.”

McKinney is the USDA Under Secretary for Trade and Foreign Agricultural Affairs.