Undersecretary of Trade and Foreign Affairs Ted McKinney is wrapping up his first USDA trade mission to India. This was the first trade mission for McKinney in his new role at USDA. He hold HAT, from New Delhi, that the purpose of the trip was to promote U.S. farm products as well as, ”Advance our trade policy relationship with India.” 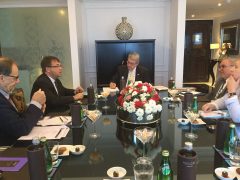 The former ISDA Director said, while the new farm trade policies of the Trump administration are being met with concern here at home, the move toward bilateral trade deals is seen as a positive in India. “The reset button on U.S. trade policy is seen as being a good thing with great benefit for India,” stated McKinney. While there may be skepticism in the U.S., in India “They are ready to engage.”

Over 50 representatives from a wide variety of commodity groups and trade organizations are on the mission including corn, soy, pork, and ethanol. McKinney told HAT India is a growing market for ethanol and may soon begin importing DDGs, “I think there is a path forward for DDGs.” McKinney noted there is a misunderstanding in many parts of India that DDGs are a genetically modified product, “That is simply not true, since they are a byproduct of ethanol production and are denatured in the process.” He sees positive movement toward allowing imports of DDGs.

As of yesterday, over 435 business to business meetings had been held by members of the trade delegation. The group returns to the U.S. this