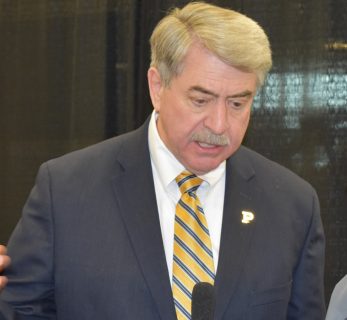 Agriculture leaders within the Trump Administration are working hard to open new export markets for U.S. farmers, to the point that Ted McKinney with USDA calls himself bullish on trade. He spoke at the Agri-Pulse Ag and Food Policy Summit in Washington, D.C., Wednesday. McKinney thinks the U.S. will reach a modernization agreement for the North American Free Trade Agreement and possibly even Korea.

Also Wednesday the Wall Street Journal reported that China is seeking to target U.S. soy in retaliation to the Trump administration tariffs on aluminum and steel that take effect Friday. McKinney remains hopeful.

“I continue to hope that China will understand that they’ve got to change their ways if they’re going to be on the world stage, and I mean that in the most positive sense. And I think that there’s the opportunity. I know that President Xi has a very strong relationship with our Ambassador Branstad, who they’ve known from many, many years ago. We’re working on all kinds of options to see how we can mitigate that, to see how we can remedy that. I suspect there will be some short-term pain, but I still say the best answer is fix it for the long term, and that’s what we’re doing.”

During his address, McKinney pointed out that trade is a two-way street and more than half of winning the battle is showing up. He reminded the audience that gaining new markets is a delicate process.

“I hope you’ll keep headlines, rhetoric, even tweets and other things in perspective,” McKinney cautioned. “Sometimes you have to push the boundaries a little bit more to even get part way to where you’re going, and I believe the President is very serious about things he says. Sometimes he isn’t literal about it, but always he is serious. So, keep that in perspective, whether it’s headlines, worries, even joys, keep in perspective because we all know the next day can be very different. And the same thing goes on at your business or at your farm.”

McKinney, the former ISDA director, is USDA Undersecretary of Agriculture for Trade and Foreign Agricultural Affairs.