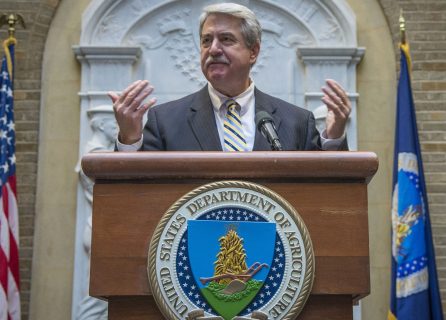 Ag Department Under Secretary for Trade and Foreign Agricultural Affairs Ted McKinney will lead a trade mission to Central America. The mission will be in Guatemala from February 26 to March 2nd. McKinney will be accompanied by a delegation of agribusiness and state government leaders who are looking to increase agricultural exports to Central America’s Northern Triangle of Guatemala, Honduras, and El Salvador. “The Northern Triangle offers significant market opportunities for exporters of U.S farm and food products,” McKinney says. “Thanks to population and economic growth in the region, demand for imported goods, particularly high-value, consumer-oriented food products, is rising.” More than 95 percent of U.S. agricultural exports enjoy duty-free access to the region under the CAFTA-DR agreement.”

Since implementing the agreement in the Northern Triangle in 2006, ag exports have doubled, totaling $2.2 billion in 2017. While the mission is based in Guatemala, mission participants will also have the chance to connect with importers from El Salvador and Honduras, who are scheduled to travel to Guatemala. The USDA Foreign Ag Service will set up around 450 one-on-one business meetings between U.S. delegates and representatives from local companies who are interested in purchasing U.S. goods.

McKinney says he anticipates a trade deal with Japan will likely take place if the United States doesn’t re-enter into the Trans-Pacific Partnership. McKinney says he doesn’t know what the scope of the agreement will be but calls it “not a matter of if, but when.” He spoke about the topic during the Agricultural Outlook Forum.

President Trump pulled the U.S. out of the TPP during his first week in office. Since then, the remaining 11 countries have agreed to a revamped deal, known as the Comprehensive and Progressive Agreement for Trans-Pacific Partnership. The 11 countries intend to sign the new deal early next month. McKinney says the timing of the U.S. potentially landing a trade pact with Japan or with other TPP countries is critical for American agriculture, which is competing for Asian market share. He says the administration’s effort to strike bilateral trade deals will depend, in part, on how the U.S., Canada, and Mexico wrap up the NAFTA negotiations. “I hope we don’t have to wait until NAFTA is done before we get going on other deals,” McKinney says. He does worry about the issue of bandwidth, as the U.S. trade officials are all focused on the NAFTA negotiations.