McKinney Optimistic About Trade Deal with China Without Compromise 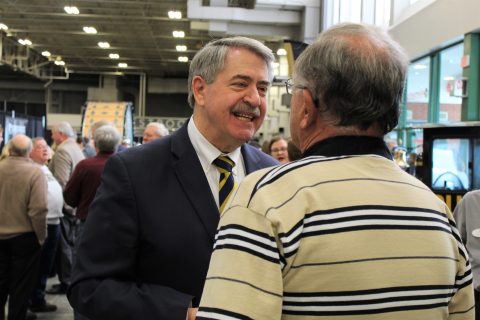 Undersecretary for Trade and Foreign Affairs Ted McKinney made an appearance at the Purdue Ag Alumni Fish Fry over the weekend. He told Hoosier Ag Today that he is optimistic about a trade deal with China, saying, “I sense a strong desire on both sides to come to some sort of agreement.”

McKinney stressed there are certain issues on which the President will not compromise.

McKinney stressed that, while a deal with China is important, there are many other places in the world where U.S. farmers can make progress in developing new markets and negotiating new trade agreements.

“We must not forget the rest of the world because there are opportunities out there and we are trying to bring those to bear,” he stated.

After spending a fun afternoon with fellow Purdue Ag alumni, McKinney hit the road on yet another trade mission. This week he is in the Dominican Republic and Brazil. The Tipton County native is confident the USMCA will pass Congress and that trade talks with Japan will begin soon.