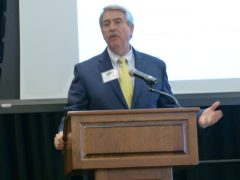 His name has been on the short list from the opening days of the Trump administration, but, late Tuesday evening, Secretary of Agriculture Sonny Perdue announced that Ted McKinney has been selected as the new Undersecretary for Trade and Foreign Agriculture Affairs. In a statement, Perdue said, “For our new undersecretary position emphasizing international trade, I have always said that I want someone who wakes up every morning asking how we can sell more American agricultural products in foreign markets. Ted McKinney is that person. His longstanding background in agriculture, economic development, and global issues will make him an unapologetic advocate for U.S. products in the world marketplace.” The position that McKinney will assume is a newly created post as part of the USDA reorganization.

McKinney has been director of the Indiana State Department of Agriculture since early in the Pence administration. He has overseen the redevelopment of the Indiana Grown program and, most recently,  directed the creation of a strategic plan for the growth of Indiana agriculture over the next decade. McKinney has international experience, having served with Elanco Animal Health and Dow AgroSciences in a communications capacity. Raised on an Indiana farm and alumni of Purdue, McKinney is a passionate believer in the productive power of American agriculture and the technology that will continue to drive U.S. production. Active in both the Trump ag advisory committee and the Pence campaign for governor, McKinney has plenty of political experience and familiarity with the key issues facing U.S. farmers.  With renegotiations on NAFTA underway, McKinney will find himself at the center of the agricultural trade policy of the Trump administration.

Governor Holcomb, who will now be on the hunt for a new ISDA director, said, in a statement late Wednesday evening, “Ted will be a strong voice in this new role with the U.S. Department of Agriculture. He took agriculture to the next level in Indiana with his wealth of experience and enthusiasm in all sectors of the agriculture community, and I know he will do the same for our nation in this position as undersecretary for trade and foreign agricultural affairs.”

The USDA also announced the nomination of Dr. Sam Clovis for Under Secretary for Research, Education, and Economics. Perdue said, “Dr. Clovis was one of the first people through the door at USDA in January and has become a trusted advisor and steady hand as we continue to work for the people of agriculture. He looks at every problem with a critical eye, relying on sound science and data, and will be the facilitator and integrator we need. Dr. Clovis has served this nation proudly since he was a very young man, and I am happy he is continuing to serve.”