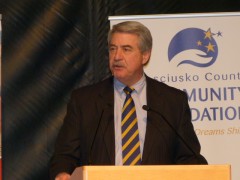 Former ISDA director Ted McKinney begins his new role today as Undersecretary of Agriculture for Trade at USDA. In part 2 of his conversation with HAT, McKinney says he is ready to take on the tough task of promoting U.S. agriculture around the world. He is optimistic he will be successful, “Can the U.S. and will the U.S. be that reliable supplier of high quality food products, and I think the answer is unequivocally yes.”

The Trump administration has set forth a new philosophy on trade, one that puts the concerns and interest of the U.S. first. The President has also made it clear he favors bilateral trade deals rather than multilateral agreements. It will be McKinney’s task to articulate that new policy to our trading partners. Yet, he feels, while our trade goals may be different, the message is much the same, “Trade is built on trust, and it will be my task to build that trust with our trading partners.”

McKinney says he expects to be at the table during the NAFTA negotiations that resume this week. Thus far, the talks have not produced any meaningful agreements on agricultural issues. McKinney said Secretary Perdue is expecting him to lead the discussion on agricultural trade. The current dairy dispute between the U.S. and Canada may prove to be one of McKinney’s toughest challenges.

McKinney will also be meeting with other customers and potential customers for U.S. farm products, “The U.S. has a ready supply for a world that is demanding ever more protein.” McKinney also plans to stress that the U.S. can meet the world’s food demands regardless of weather or disease problems, “While other nations struggle with this, year in and year out, you can count of the safety and quality of U.S. farm products.”

McKinney has the skills and the experience to get the job done, if he continues to have the support of the of the White House and the Trump administration.