McKinney Says Progress is Being Made on Trade and Farm Bill 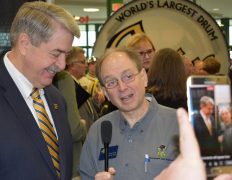 Undersecretary of Agriculture for trade and foreign affairs at USDA, Ted McKinney was one of the potentates at the Purdue Ag Alumni Fish Fry. In a Facebook live interview, McKinney told me progress is being made on new trade deals for American agriculture around the world, “My team has been making new deals and opening some markets. We have been laying a lot of groundwork for future agreements.” He added these may seem like small agreements compared to things like NAFA but, “Singles and double are important, they do score runs.” He said he remains very bullish on prospects for agricultural trade.

Last week the President indicated he might be willing to re-examine a TPP agreement, McKinney said TPP or something like it would benefit American agriculture, “The President’s position currently is for bilateral agreements, and we can do that if nations like Japan and others are willing. But, if TPP becomes an option, we can do that, too.” He stated that they are just different pathways to get to the same place, “and we will embrace that.” He did say there would have to be changes in the TPP language in order for the U.S. to agree, but it could be a deal that benefits U.S. farmers. 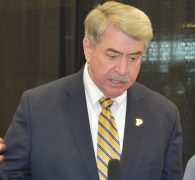 The native Hoosier and former ISDA director said movement on getting Gregory Doud approved by the Senate will help advance trade negotiations at NAFTA, but more action is needed to fill other key USDA positions. “We hope the good Senator from Texas will realize that we need Bill Northey and will clear the way for his consideration by the Senate,” McKinney said. “The Farm Bill is getting very very interesting, and we need Bill.” Indiana Senator Joe Donnelly, who was also at the Fish Fry said he would support Doud and other key Trump administration ag appointments. Sen. Ted Cruz (R-TX) has put a hold on Northey’s confirmation.

Sen. Jeff Flake (R-AZ) released his hold on President Donald Trump’s nomination of Gregory Doud as chief agriculture negotiator. Flake had placed the hold on Doud because he was upset about the Trump administration’s North American Free Trade Agreement proposal involving Florida tomato products. McKinney praised Doud, “I have talked to Greg and we are going to be partners of the first order, and that is positive for trade.”

Catch the interviews from the Fish Fry on HAT’s web site and Facebook page.