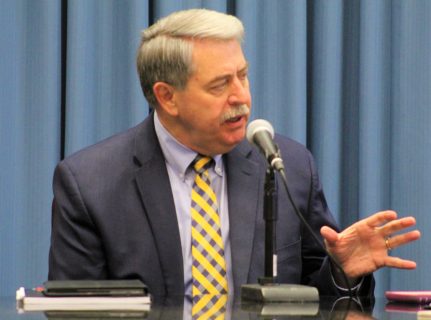 Rumors were that China was starting to back away from previously negotiated and settled items in trade talks last week, prompting President Trump to increase tariffs again on Chinese goods. Speaking to farm broadcasters in Washington, D.C. on Tuesday, Under Secretary for Trade and Agricultural Affairs Ted McKinney confirmed those rumors.

“I will tell you the discussions on ag had gone well. We were pleased, but I’ll never forget we were on a digital video conference and I looked at Mr. (Gregg) Doud (Chief Agriculture Negotiator, Office of the US Trade Representative) and he looked at me, and we said this is different. We sensed this backsliding starting, and then we compared our notes with other teams, so there was distinctly a change of views by our friends in China. That doesn’t mean we’re mad at them. We do believe, we still believe, I am still optimistic, that we’re going to get there.”

McKinney says more trade aid is on the way as the president and Ag Secretary Sonny Perdue have said it’s all hands-on-deck to move quickly on it. How quickly?

“I think it’s more like days, not weeks or months. So, that’s as close as I can get because I don’t want to get out ahead of the Secretary or the President, but the intent is to be quick because we want to send a powerful message to, first, our farmers, and ranchers, and the ag world, but also to our friends around the world that ag is not up for debate.”

Under Secretary Bill Northey warned that producers should still plant for the market and not for what you believe the trade mitigation program might contain.

President Trump is planning to meet with Chinese President Xi Jinping at the G20 Summit in Japan next month. McKinney says, “That’s a good thing. If you’re still talking, it’s a good thing. So, I’m optimistic because I think China really does need the U. S. and certainly, we need and want them.”