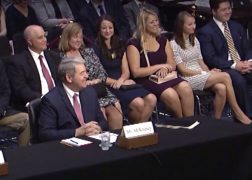 It is expected that McKinney and Censky will be approved and have their names sent to the full Senate for final approval. Secretary of Agriculture Sonny Perdue has stated he has wanted McKinney and Censky on the job several months ago. Perdue, who has been on the job since April, has been waiting for Congress to confirm the nominations so he can continue the work of reorganizing USDA and taking action to stimulate U.S. agricultural exports. Both McKinney and Cinsky have been endorsed by most major farm organizations.