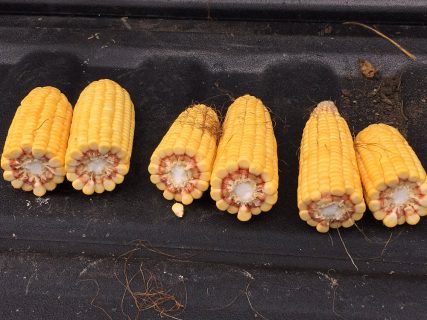 Low ear counts in Hoosier corn fields and crops that are well-behind schedule are common on the Pro Farmer Midwest Crop Tour as it wrapped up the second day. Also common is a great deal of variability. Monday night the Ohio results were announced, and the corn estimate was 154.35 bushels per acre. Soybeans averaged 764.01 pods in a 3×3’ square.

The Indiana corn yield announced Tuesday night improved over the Ohio average. Indiana came in at 161.46 with the best result just over 170. Soybean pod counts were better too and the Indiana average was 923.94.

On the eastern leg of the tour which worked from Ohio through Indiana and into Illinois, first day crop health was a concern of tour agronomist Mark Bernard.

“We certainly saw the maturity issues we’ve been hearing all summer long, both on the corn and the bean side,” he said. “I was probably most disappointed with the beans actually. We looked at beans that were about 2/3 of what they were a year ago, and that concerns me. Not only that, there’s a lot of blister stage corn as well, so is it going to make it? That’s hard to say here in Indiana especially without Lake Erie to protect it like Ohio has.”

Pro Farmer Editor Brian Grete says both the corn and soybean crops are immature, but he also was particularly concerned with soybeans.

“The pod counts were down comparatively way more than the corn yield was. The corn yield was down 14 percent year over year from what we found on crop tour. The soybean pod counts were down almost 40 percent, so that’s real startling there. I think soybeans, if they don’t get the late season weather or the extended growing season, the rains, they’re really going to struggle to produce a yield that would be anywhere near what normal would be.”

Tour scouts expected to see sluggish crops, but Grete says it was a little startling how immature they were on day one.

“Didn’t see any corn that was past milk stage on the samples that I pulled personally, so that is startling because we’re going to need multiple weeks on the end of the growing season to get it to the finish line.”

Crop scouts ended Monday night halfway through Indiana and will finish Tuesday evening in Illinois with Indiana results tabulated at that time. Follow along online at www.profarmer.com and on social media #PFTour19.