Minding the Margins in 2015 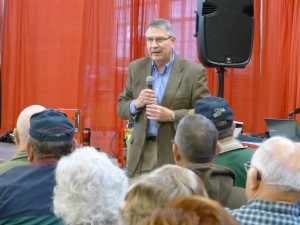 Dr. Chris Hurt’s annual outlook program drew a standing room only crowd at the Indiana/Illinois Farm Equipment Show at the Indiana State Fairgrounds on Wednesday. His message: mind the profit margins in 2015. With corn and soybean prices down and production costs up, most Indiana farmers will find their profit margins shrinking by as much as $200 per acre in 2015.  Hurt said those farms with a large land base will be in the best position to handle the decline, “Take a 2500 acre farm and the family owns 1000 acres free and clear — they are in a very strong financial position and have a very low cost of production.” He added that farms with less working capital and a large number of rented acres will find 2015 to be a very hard year, “Those farms that have to pay rent for every acre have some very negative margins right now.” He admitted that those producers who were very aggressive in acquiring land in the past few years may have made a good move.

For the past several years, growers have focused on maximizing production. Hurt says, for the next few years, it will be about minimizing costs, “For the past several years, we have not had to worry too much about how much something costs, but now we are going to have to pay attention to the cost of production.” Hurt believes that farmers will be making adjustments to their operations to lower their production costs, “I think we will see a reduction in application rates, especially for nitrogen; seeding rates may be cut a bit; and any new technology will have to have a cost reduction benefit.” He also told HAT some growers are looking at less expensive non-GMO alternatives. He does not think, however, that most growers will be able to do much to reduce their biggest production expense: cash rent. He said it will likely be 2016 before cash rent prices will begin to come down.

The Purdue ag economist sees corn prices averaging in the $4 and soybean prices about $10 for at least the next two growing seasons.  He said for 2015 the economics favor soybeans rather than corn.