Moms Not Always Right on GMO 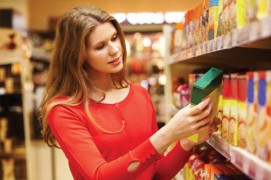 Despite months of intense legislative efforts, we still do not have agreement on a national labeling standard for biotech food products. Part of the reason we can’t make any progress on this topic is because of groups saying things like this: “There is all kinds of harm that show GMOs are a problem.” That quote is from Zen Honeycutt with the group Moms Across America. Her group has been on Capitol Hill lobbying lawmakers with what can best be described as science fiction.

According to Honeycutt, “GMOs are essentially a chemical delivery system to humans. And if it is not chemicals they are delivering, it is foreign protein. There is not enough science so show that they are safe.” Over 30 years of use, thousands of research studies, and billions of meals eaten without one person getting sick have not been enough to slow the opposition to or dispel the myths about GMO food. Honeycutt, however, does not blaming farmers, “You have been lied to for many years.” She blames the chemical companies who “only want to make money” for the use of biotechnology in food production.

In a Wall Street Journal opinion piece published this week, a California Agriculture Education official says farmers and the food industry need to stand up for GMOs by labeling them. Richard Sexton, Chair of the University of California-Davis Agriculture Department, along with his son Steve, a public policy professor at Duke University, wrote the opinion piece. They say labeling GMOs could be the best way to make consumers confront their irrational fears and stamp out public ignorance. By labeling GMOs, the pair says consumers will realize that they have been eating GMOs for years without adverse effect and add that consumers simply need to be educated about their food.

The ranking Democrat on the Senate Agriculture Committee, Michigan’s Debbie Stabenow, says lawmakers are getting “close” to reaching a deal on GMO labeling. Stabenow said she and the committee’s chair, Kansas Republican Pat Roberts, are “narrowing the issues” surrounding GMO labeling legislation. Stabenow says she and Roberts are meeting constantly. However, they have yet to share a draft bill with the full Senate. The bill, aimed at blocking state laws like the Vermont law taking effect July first, would set a national GMO labeling standard. To stop the Vermont law in time, the Senate must pass the legislation this week for any hope the House can consider the bill before going on recess next week. Questions remain over one of the most fundamental issues: whether on-pack labels should be part of a mandatory disclosure system. Come July first, on-pack labeling will become the de facto national standard, as food and beverage manufacturers will be forced to comply with Vermont’s law or potentially face a $1,000 fine, per day, per product.