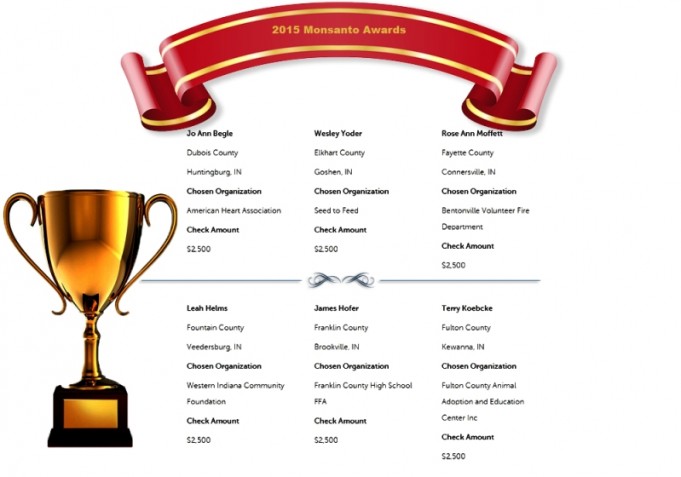 As Hoosier farmers eye the yield monitor in the combine this harvest, they might also ponder what local nonprofit organization would be worthy of a $2,500 donation. The local farmer can make it happen for his community via America’s Farmers Grow Communities, sponsored by the Monsanto Fund.

“In January we will announce the winners and we will be giving another $3.3 million across 40 states. In December we will randomly select winners, one winner in each of the eligible counties, and then we’ll announce those winners in January. It’s just a very simple way to make a difference in your community, and all you have to do is go online and sign up at www.growcommunities.com.”

Over $19 million has been awarded since the program’s start in 2010 and nearly every Indiana county received an award last year. Allen tells HAT the awards are often times designated for ag youth programs and schools, and emergency response organizations.

“In Indiana farmer Harold Morgan (Carlisle, IN, Sullivan County) won last year and he directed his donation to the Carlisle-Haddon Fire Department and the organization used the money to buy a mobile cascading system which allows firefighters to refill their breathing tanks on site during an emergency.”

Farmers are eligible to make nominations if they are 21 or older and actively farming in an eligible county even if they made a nomination last year. You do not have to be a Monsanto customer. The website is www.growcommunities.com or you can call 877-267-3332 to get full details and enroll.