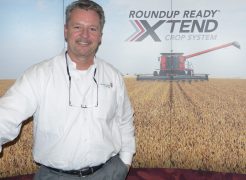 A new tool to control glyphosate, ALS, and PPO resistant broadleaf weeds in soybeans hits the fields this year and the Office of Indiana State Chemist (OISC) has published a set of guidelines for those farmers considering newly approved dicamba-based herbicide products. One of those is Monsanto’s XtendiMax™ herbicide with VaporGrip™ Technology, approved by the EPA for in-crop use.

Glen Murphy, a southern Indiana technical agronomist for Monsanto is one of those educating farmers and applicators about the critical need for accurate application.

“It’s been an awkward launch,” he explained. “Through most of my career as a commercial agronomist we talk about all the features and benefits, and it puts a lot of excitement in the air. But it is important with this technology, while it provides very effective and uniquely effective weed control options and flexibility for soybean growers, we need to be very careful with the stewardship. We know in the state of Indiana there are some very high dollar crops when you think of tomatoes and melons, and potentially a little tobacco as you come south, but these are crops that are going to be very sensitive to the XtendiMax herbicide or any form of dicamba.”

Using a dicamba-based herbicide requires extreme caution because of how active it is even at very low levels. Dicamba formulations for corn are not new, but dicamba tolerant soybeans are.

“So we have been really emphasizing and encouraging not only our applicators but our farmers, everyone who will be interested in the system, come out and participate in the XtendiMax application training.”

And he told HAT a large adoption of the system is expected this year, with a potential for 15 million acres.

Murphy was part of 2-hour training sessions last week at the National Farm Machinery Show. The Roundup Ready® Xtend Crop System is the largest launch in Monsanto’s history, and because of the delays in getting approval Murphy says growers benefit from the availability of 2nd and 3rd generation high yielding genetics right away.

Listen for more from Murphy including the approval process update:Glen Murphy Xtend update