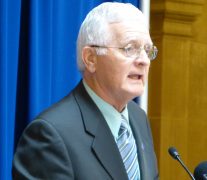 More funding for Indiana roads, including agriculture’s push for rural infrastructure improvements, should move to the next step this week as the Indiana Senate Tax and Fiscal Policy committee hears House Bill 1002. That’s scheduled for Tuesday morning.

This session road funding is the number one issue for state commodity groups and Indiana Farm Bureau, not to mention legislators like farmer and House Ag Committee Chairman Don Lehe from White County.

“We see it in the rural areas,” he said. “Roads need help, whether it’s state roads or local roads, and a lot of what we’re doing will address the local road concerns, but also all the aspects of agriculture involved with the transportation, bridges, are very important. I think we’ll come out of the session hopefully with a feasible, long range plan for generating another $1 billion a year which is the challenge. Some of that is not going to be real popular as far as the sources if it’s taxing or fees and so forth.”

Lehe says most people, especially in agriculture see the state’s need for the funding, and expects a good bill to pass.

“I do think we’re going to have some positive things,” he told HAT. “Some of it may be phased in but I think we’re committed to that end and we will do what we can to make sure it happens.”

Indiana Farm Bureau supports the increased user fees through the gas taxes and registration fees and the shifting of sales tax on gas for road funding. Justin Schneider at INFB is asking members to take the time to communicate with your state senator.

“It’s important that they hear from us. They need to understand that we want to see 1002 passed. We understand that they’re going to have to raise taxes and we know that’s not easy for some folks, they don’t want to do that. But the reality is the money has to come from somewhere and this is tied to use of the road, which our policy supports.”