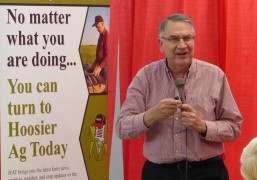 The last USDA Hogs and Pigs report issued in December estimated this year’s supply of pork will be larger than most analysts expect. U.S. pork producers, in the last quarter of 2016 set a pigs-per-litter record and for the entire year, the new annual record is 10.5 pigs per litter. Every sow is having more pigs so there will be an increase in pork output by about three percent this year. That’s the expectation of Purdue University Agricultural Economist Chris Hurt.

“And that will be to 27.5 billion pounds,” he said. “Pork production will rise by four percent in the first half of 2017, by about two percent in the last-half.”

Normally you would think with the higher production annual prices would be lower, but Hurts says there is more to consider.

“First, retail prices did drop in 2016, but there is an opportunity for retail prices to come down even more, and lower retail prices would help stimulate the quantity of pork consumers purchase. Secondly USDA expects exports to expand by five percent and that will move more of the increased production to foreign consumers. Finally, with the addition of new processing capacity the farm to wholesale margins are expected to drop. Lower margins at the processing stage may contribute to stronger bids to hog producers.”

Live hog prices are expected to be about $48 in 2017, $2 higher than in 2016. Hurt predicts prices will average $45 in the first quarter, the very-low $50s in the second and the third quarters, and then drop to $43 in the final quarter of 2017. A range of $2 higher or lower would be reasonable for price projections.

Hurt expects costs of production to be around $50 on a live weight basis in both 2016 and 2017 based on current feed price expectations. That totals an average loss for producers of $12 a head last year and $6 a head this year. Because the 2017 outlook is for weak returns Hurt says it is important hog farmers keep further expansion to a minimum. This will be difficult with new processing capacity coming in 2017 as those plants will want to stimulate some added production to fill their lines.

US, EU Reach Deal to End Trade Dispute Over Subsidies