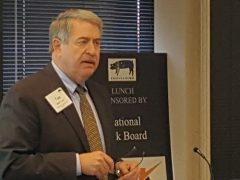 This week Ted McKinney was confirmed as the first ever Undersecretary of Agriculture for Trade and Foreign Affairs. Following his confirmation the first media interview McKinney did was with Hoosier Ag Today’s Gary Truitt. McKinney will begin his work in Washington on Monday; but, as he leaves Indiana, he does so with a sense of accomplishment. One of his success stories is finally getting the Indiana Grown program really working, “It is not just the 914 members we have in the program, but the fact that we demonstrated that everybody can play under that big tent of agriculture together. We don’t have to denigrate each other based on our methods or types of production.” He also is proud of the strategic plan that ISDA helped draft which sets out a roadmap for Indiana agriculture for the next decade.

One of the biggest challenges McKinney sees his successor facing is land use issues, “How do we go about sighting a manufacturing plant, a livestock barn, subdivisions and housing in rural areas; how do you go about that?” He feels the Land Resources Council at ISDA will play a major in helping local communities answer these questions.

McKinney told HAT he has provided recommendations to the Governor and Lt. Governor on who should take over ISDA. He even said he has had conversations with specific individuals, but declines to name names. It is possible that the announcement could come as early as next week.

Once in Washington, McKinney said he expects to find himself front and center on the NAFTA negotiations, “Secretary Perdue has made it clear that my role will be to be at the fore, at the table, leading on ag discussions.” He said his first priority will be to get “grounded” and to make sure he understands what Secretary Perdue and President Trump want. McKinney, who has a reputation as a team player and consensus builder, feels he will be able to unite the many different areas at USDA that impact trade into this new department. He also spoke confidently of being able to work with the State Department and USTR.

You can also listen to the entire interview with Ted McKinney on The HAT Newsmakers podcast.