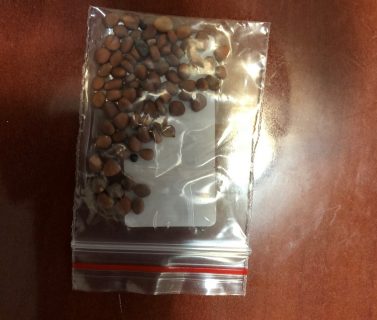 Mystery seeds from China have been showing up at people’s homes across the country and Indiana is no exception.

The Indiana State Department of Agriculture confirms there are a handful of cases here in the Hoosier state of seeds showing up in packages that look like jewelry or other small items.

Don Robison, seed administrator for the Office of the Indiana State Chemist, says if you receive these seeds by mail, do not plant them or throw them away.

“We want to know what the seed is. We want to make sure that nobody plants the seed. It could come diseased, it could be something that is invasive. So, don’t plant it. Don’t just throw it away, which would be the same as planting it, because it would go to a landfill and moisture in the landfill would get it to grow.”

Robison is asking that the seeds be sent to the Indiana State Seed Lab where they will identify the seeds at no cost to the person sending them in.

Robison says if you receive the seeds, you have more to worry about than just what to do with them. He says Amazon calls it “brushing”, and he explains how it works.

“Something of relatively low value will be sent to an individual after their account has been hacked. Then, the people that hacked your account will then fill out a review of the product for you. It looks like what has been called a ‘brushing’ scheme to get high reviews for a product.”

Again, if you receive the mystery seed, do not plant it or throw it away and do not open the package. The seeds can be sent by mail to the Indiana State Seed Laboratory at the address below.