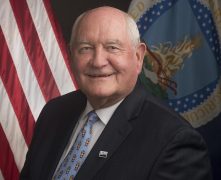 Agriculture Secretary Sonny Perdue played host to his counterparts from Mexico and Canada on Tuesday in his home state of Georgia, which some see as the unofficial beginning of negotiations to rewrite the North American Free Trade Agreement. The trilateral meeting is the first time the three met since President Donald Trump triggered renegotiation efforts for the agreement.

Following the meeting, Canadian Minister of Agriculture and Agri-Food Lawrence MacAulay; Mexican Secretary of Agriculture, Livestock, Rural Development, Fisheries and Food Jose Calzada; and United States Secretary of Agriculture Sonny Perdue issued a joint statement pledging cooperation and a commitment to open and fair trade. “We share a commitment to keeping our markets open and transparent so that trade can continue to grow. That mutual commitment was reaffirmed in our discussions.” The statement also addressed a commitment to a closer and less confrontational relationship between the three nations, “Our visit to Georgia fostered the mutual understanding and personal relationships that will help North American agriculture thrive, improve our regional partnership and collaboration, and strengthen our trading relationship.”

While NAFTA has boosted U.S. agricultural trade between Canada and Mexico,  the trade deal does have its problems.  National Pork Producers Council Spokesman Dave Warner hopes the renegotiations can fix some of the livestock issues, “NAFTA has been very good for the pork industry and we need it to continue.” Warner says NPPC supports updating NAFTA provisions that eliminate non-tariff, sanitary barriers, using the defunct TPP’s provisions as a template.

American Farm Bureau’s Dave Salmonsen says the Tuesday meeting was not about specific issues but a big picture overview and a chance for Secretary Perdue to stress the importance of agriculture trade as part of any new NAFTA deal.

AFBF president Zippy Duvall said the meeting helped calm fears of a disruption of agricultural trade that would take place if NAFTA was not renewed, “It is encouraging that Agriculture Secretary Sonny Perdue is meeting this week with his counterparts from our neighboring nations to build a deeper level of understanding. This is particularly important as our nations begin to discuss a review of the trade agreement linking our farmers and ranchers. NAFTA has created vast opportunities for agricultural trade for America’s farmers and ranchers with Canada and Mexico, and we encourage Secretary Perdue to use this meeting to identify areas to further improve agricultural trade with our neighbors.”

Several difficult trade issues face the negotiators, phytosanitary and dairy issues topping the list. Canada remains committed to its supply management system for dairy, about which Perdue previously said “created a glut on the market.” Canada does not seem willing, though, to make changes to its system through NAFTA renegotiations.