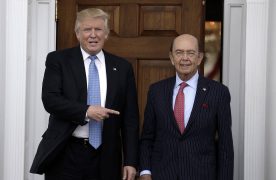 Commerce Secretary Wilbur Ross told CNBC that the North American Free Trade Agreement renegotiations are “far from being completed.” While noting that progress was made on easier provisions, he says “very little has been done on the hard issues,” including automotive trade and agriculture. Ross says President Trump could still choose to withdrawal from the agreement, saying a final renegotiated deal “will either be 100 percent or zero percent” acceptable. However, Canadian Prime Minister Justin Trudeau, in an interview with the Canadian Broadcasting Corp Wednesday said: “I don’t think the president is going to be cancelling it,” saying it would be “obviously bad,” if he did. The next series of talks are to begin February 26th in Mexico City. Meanwhile, there’s speculation that the bid to salvage the free-trade pact will continue beyond an end of March deadline, which was set to avoid Mexico’s presidential race.

Senator Tom Udall of New Mexico is urging Congress to “step up” and tell President Trump that there is widespread support for the NAFTA modernization effort, but not an exit from the trade deal. The Democrat says Trump “cannot unilaterally repeal” trade laws regarding NAFTA, “even if he can issue unilateral statements” regarding NAFTA participation, according to Politico. The comments came during a Senate Foreign Relations Committee hearing earlier this week. Udall says the withdraw threat is “a tactic doomed to fail,” and adds that, if carried through, “our economy and border will suffer great damage.” The President also received a letter from high ranking Senate Republicans before his State of the Union Address earlier this week, highlighting the economic benefits of the deal, particularly for the agricultural and manufacturing sectors. The group, led by Colorado Republican Cory Gardner, says modernizing the deal would be “the next step to advance the economy.” Senate Agriculture Chair Pat Roberts also signed the letter, along with Majority Leader Mitch McConnell, and others.