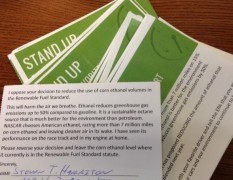 Over the last five years since NASCAR made a switch to E15 American Ethanol, fans have developed a special appreciation for the horsepower of ethanol as well as its social and economic benefits. That new knowledge translated into action last weekend as hundreds of fans attending races in St. Louis and Michigan took time to send post comments to the U.S. Environmental Protection Agency asking it to reverse their decision to reduce the use of corn ethanol.

“We make ethanol here, so it has many benefits, such as lower fuel costs for consumers, job creation, and of course cleaner air — which is why NASCAR changed to E15 American Ethanol,” said Jon Holzfaster, a farmer from Paxton, Neb. “So, it is very encouraging to see the fans engage and try to make sure the current Renewable Fuel Standard remains in place.”

Several hundred fans sent post cards messages to expressing their concern should the country drift away from its commitment to renewable, environmentally superior biofuels.

With the opening of the public comment period regarding the U.S. Environmental Protection Agency’s proposal to cut corn ethanol in the Renewable Fuel Standard by nearly 4 billion gallons, the National Corn Growers Association is also urging farmers and their family and friends to email their opposition to this proposal as soon as possible, before the July 27 deadline.

“One of the major goals of the American Ethanol program is to raise general public awareness of all higher blends of ethanol have to offer and it’s working,” Holzfaster said. “NASCAR fans have become more knowledgeable and supportive, so it makes perfect sense to give them a way to join farmers and show their support.”

For details on the proposal and a link to send a quick email, visit ncga.com/rfs. Various draft comments are available to enable both farmers and their non-farmer friends to easily send personalized notes to the EPA.

Corn growers from Michigan, Illinois, Missouri and Kentucky joined forces to continue the educational program over the weekend and to collect the messages to EPA from fans.