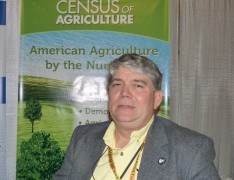 It may seem a little soon to be talking about the next Census of Agriculture, but approximately one year from now USDA’s National Agricultural Statistics Service, NASS will begin sending 3 million surveys to farmers across the country. Joe Prusacki with NASS says they are already making farmers aware of the coming 2017 census because completed surveys are critical to its accuracy.

“It’s the one instrument that gives a complete snapshot of what’s going on at the county level,” he said. “There are other products that USDA NASS has available giving the corn yield in a particular county or acres of soybeans, where the census gives me the whole snapshot what’s the total value of land and buildings in that county? What’s the makeup of the farms? Are they small farms or large farms or family or corporate farms? You know, what do they look like? That census is the only source of that micro-level data that tells me everything about the farm sector.”

Census data is useful for farmers but can also benefit local economies as companies look for trends in rural America that might warrant expansion considerations. NASS is also aggressively promoting participation in all of its surveys since response rate has been eroding in recent years.

“Over time all statistical agencies in the U.S. and around the world have experienced this decline in participation in the surveys. There are probably a lot of reasons for it and at NASS we have a team trying to identify those. But one thing is we just always, always respect the farmer. They provide us the best information possible because they’re the ones who know what’s going on in their operation.”

Prusacki says don’t be overcome when you see the size of the survey. It doesn’t take long to complete on a per farm basis.

“For most producers, there’s maybe ten or fifteen questions that are relevant to their operation,” he told HAT. “It’s pretty tough to tailor questionnaires for each operation in the United States, but you have to have a questionnaire that covers all gambits across the board.”

Prusacki is Director of the National Operations Division at NASS.