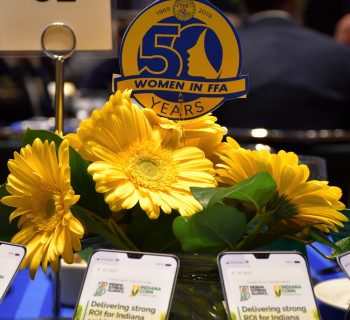 The 92nd National FFA Convention & Expo in Indianapolis is off and running, and the impact on the students and the city is what you might expect of a gathering of 70,000 strong, most of them sporting the blue jackets seen all over the city.

Annually the imprint of the convention includes that of agriculture related businesses from across the country. Also, Indiana farmers representing the Indiana corn and soybean checkoffs sponsor the community lunch on Tuesday.

“It’s an investment in the future of agriculture and I think we should be involved even more than what we are, so that’s why I’m here today,” Roger Bommer, a board member of the Indiana Soybean Alliance and 1969 state FFA officer said.

“Back then it was Future Farmers of America and you didn’t see very many females there in the membership. That’s a great change that we’ve seen.”

The move to allow females in FFA started 50 years ago, and the change is being commemorated this year. Beard says FFA back in his years offered opportunities not otherwise available to rural kids, and he is impressed with how the organization has evolved.

“I’ve gotten to see the changes with two children in FFA and I think I’m up to three grandchildren in FFA,” Beard said. “Their scope has widened significantly. They’ve got more projects to work, more community service, and just a tremendous explosion of opportunities within the organization.”

Chris Gahl, Senior Vice President of Marketing & Communications for Visit Indy said the known numbers about FFA convention, like the 70,000 attending, the nearly $40 million in economic impact are important, but FFA brings with it a key intangible. 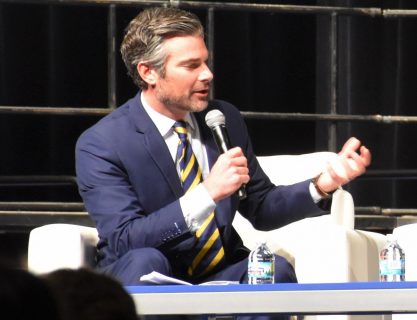 “These future leaders from all over the country are here in Indianapolis,” he explained. “They’re impressionable and we want to leave a good impression on them so that they might come back, race back, to go to college, to enter our workforce, to raise a family, and these thoughtful leaders being in your city is a big deal. And it’s something that we benefit from as a city and as a state each and every year, that the best and brightest, the future leaders, are here and hopefully having a good time and learning and taking with them positive memories to come back at some point.”

The convention runs through Saturday, culminating with the announcement of new national officers at Lucas Oil Stadium.