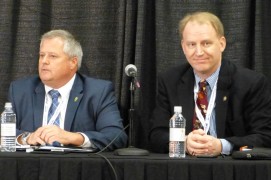 Despite the good times awaiting visitors in New Orleans, farmers attending Commodity Classic here are facing some tough economic times and difficult decisions. The event is presented by the nation’s corn, soybean, wheat and sorghum commodity groups, and when National Corn Growers Association President Chip Bowling met with the media, he outlined the current climate.

“From 2013 to 2015 net farm income dropped by 54 percent. It’s expected to drop even more this year. This represents the largest decline in farm economy in a hundred years. Since 2010 the price of corn has declined 34 percent and at the same time the price of our inputs has not come down in the same way. Most corn farmers are well past the point of prices being well below the cost of production and they have been for some time now.”

Bowling said the ripple effect when farmers have to tighten their belts goes through not just rural communities but throughout the national economy.

“Implement dealers are selling less equipment, manufacturers are scaling back in production, and agribusinesses have laid off employees,” he said. “For those of us who remember farming in the 80’s, this is troubling and concerning.”

Bowling said his association is committed to helping farmers by working to ensure a continued safety net and to improve profitable demand for the corn they grow. NCGA CEO Chris Novak said they’re in the process of formalizing programs to increase demand.

“Chip led with the statement that these are tough times for our corn farmers,” Novak said. “We’ve got a safety net in place but we also know that if we have another bountiful crop that will continue to put financial pressure on our farmers, and that’s what we’re working to solve with these demand initiatives.”

Bowling renewed the call for congress to support the Trans Pacific Partnership, a deal he said will be good for grain farmers and their partners in the livestock industry.