Over 500 farmers from across the country gathered in Indianapolis on Thursday to explore a different kind of agriculture system, one that focuses on building soil health and reducing soil erosion while cutting costs and maintaining yield. The National Cover Crops and Soil Health Conference brought together farmers who are exploring an agricultural production system that focuses on using less inputs and more agronomy. This typically involves not using a plow, planting cover crops, and diversifying crops and rotations. The result is less soil erosion and dramatic improvement in soil health and fertility.

Dan DeSutter farms 4500 acres in west central Indiana producing corn, soybeans, wheat, pastureland, and cover crops. He said this approach has been productive, profitable, and sustainable, “We have found that this approach can be profitable, but also helps us build soil fertility a lot faster.” Not only does he no-till and use cover crops, but he recently brought livestock back into the operation which has also helped improve soil health. “After two generations of tearing out fences, we are putting them back in again,” he stated.

While the use of no-till and cover crops is on the rise in Indiana, DeSutter says there are many barriers to a more widespread adoption of this system possible. He told HAT many farmers have short term cash rent agreements in much of their farmland which makes a long term investment like cover crops difficult, “They need to go to their landlords and ask for a longer term arrangement so they can make the investment that will improve the health of the soil.” He also complained that most ag retailers are not offering cover crop services to growers. 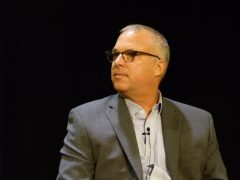 DeSutter and many other producers at the conference have found ways to make this system work and have seen their soil health improve and their cost of production fall. “Lots of people are talking about the tight economic times, but I am not feeling that economic pinch. So something we are doing is helping us to avoid this economic slowdown,” said DeSutter.

This approach is not an organic approach, but one that uses the latest agriculture technology and uses it in harmony with natural and biological systems. Yields can be just as good as with more conventional systems, but the cost of production can be much less. 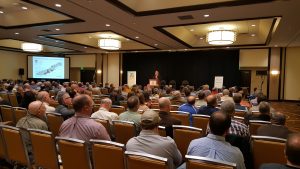 Most at the gathering felt that, while there were management adjustments that needed to be made to begin to adopt this type of farming, it was more of a mind-shift. Looking at farming in a different way is the first step. In addition, policy changes will need to be made before widespread adoption of this kind of cropping system will take place. Yet, data shows this change will need to be made if soil health is to improve and long term sustainability of food production is to continue.

Can You Safely Apply Potash Ahead of Soybeans?