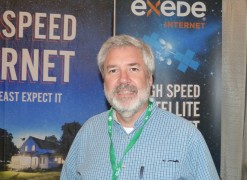 If one of your new year’s resolutions is to improve internet service around the farm, the folks at ViaSat say they now offer faster speeds for faster downloads with their Exede Internet, speeds no other satellite provider can offer the home and home office. Alex Miller says their service has come a long way in reliability since the early days of slow, expensive and unreliable satellite internet.

“We put up a new satellite in 2011, launched our Exede internet service in 2012, and we put in a lot of really great web acceleration software,” he said. “We have a network operations center 24/7-365 and it’s a very reliable and consistent service all across the country.”

Exede WiFi Modem and a 25 Mbps Plan in select areas. That enables 3 times faster speeds than typical DSL. That could be a great option for the farm office, according to Miller.

“Absolutely, and we have an Exede business service and we’re adding some plans to that that are going to have a lot higher data plans, up to 100 or 200 gigs if that’s what people need. It’s got some faster speeds and a persistent IP address which some of those farm applications need and those plans are out now.”

Voice service for home phone is also available. At the Exede website there is an option to plug in your zip code to determine what services are available in your area.

The new Exede WiFi Modem offers high value in a compact design, enabling users to do more with one device. It includes a built-in wireless router, multiple Ethernet ports and an integrated Exede Voice adapter for optional home phone service. By combining all of these functions into a single device, Exede reduces the clutter of devices and wires in the home, while improving the service. Features include:

Exede, a service of ViaSat Inc., delivers high-speed internet to residential subscribers and businesses across the U.S.

ViaSat, Inc. (NASDAQ: VSAT) keeps the world connected. As a global broadband services and technology company, ViaSat ensures consumers, businesses, governments and military personnel have communications access – anywhere – whether on the ground or in-flight. The Company’s innovations in designing highest-capacity satellites and secure ground infrastructure and terminal technologies coupled with its international network of managed WiFi hotspots enable ViaSat to deliver a best available network that extends the reach and accessibility of broadband internet service, globally. For more information visit ViaSat at www.viasat.com.