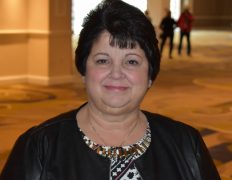 There is a new Hoosier farm woman on the American Farm Bureau Federation Women’s Leadership Committee board. Cindy Ramsey from southeast of Indianapolis in Shelby County was elected the Midwestern representative in Nashville during the AFBF convention. Ramsey is excited for the chance to build on her Indiana Farm Bureau women’s leadership experience. The program provides important training and education for women who are or want to be strong advocates for modern agriculture.

“I’m very excited about advocating for agriculture and this is another avenue for me to learn more and have more to bring back to Indiana as well as be on the national platform and its opportunities,” she told HAT in Nashville. “I’ve been with Indiana Farm Bureau for about 15 years. I started as a local board member and saw the need to get involved more and move up the ladder.”

Ramsey is also INFB’s District 8 education and outreach coordinator. While she still has responsibilities on the farm, there is more time now for Farm Bureau work than the early days would have allowed.

“I was originally a tractor driver on the farm but as the boys grew I was able to retire from that, so I’m the gopher on the farm and the meal deliverer. I still love being with the farm,” she said, but “the equipment is just a little bigger than I care for anymore!”

Ramsey, her husband Phil, and two sons run the grain operation and they also own and operate a drainage and tile business called Ramsey Farms Ag Enterprises.

The Ramsey’s were honored at the INFB State Convention in French Lick in December, being named Indiana Farm Family of the Year, the award sponsored by Beck’s Hybrids and Indiana AgriNews.

Joining Ramsey for two-year terms on the AFBF Women’s Leadership Committee are Jennifer Cross, Maryland and Lou Nave, Tennessee. Lillian Ostendorf of Montana was re-elected to a two-year term on the committee.