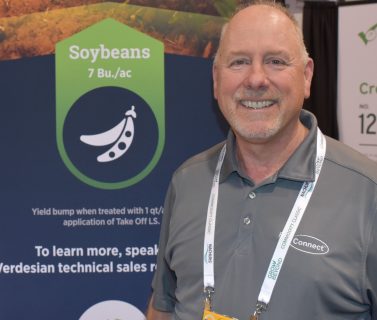 In the agriculture inoculate market, if there was a way to treat only the seed needed on any given day without moving the inoculant to a separate tank, that would be a real win. That system now exists according to Jim Pullins with Verdesian. He explains the problem for those in the inoculant business.

“We have products that are packaged sterile and they’re in disproportionate quantities, and they have to be opened and mixed up at one time and used that day,” he said. “Over the course of the day that bacteria starts to die because it can’t compete with the ambient organisms that contaminate that tank. If you’ve ever looked in an inoculant tank you’ll see that it’s a dark, dirty place. You would never want your peanut butter sandwich to drop in that tank.”

Enter FlexConnect™, now available and allowing direct connection to the original packaging and inoculant utilization as needed, “treating each seed as we apply with new fresh product. So, instead of having degradation happen in the tank we’re applying fresh product that’s pure all the way through the day, and it actually gives the applicator the opportunity to use it over a period of days rather than having to use it up the same day it was mixed.”

The system works nicely with Preside CL® soybean inoculant which growers can add when seed treatments are applied.

“And our strategy with that material is to provide the farmer with four times more rhizobia on a seed than he gets with other materials,” Pullins told HAT. It increases his nitrogen engine. When soybeans require five pounds of nitrogen to make a bushel of beans and they’ve got this hundred-bushel yield goal, that’s a 500 pound need that they have. We can satisfy that with our load of rhizobia, and then we also include Take Off® technology in that product to give the plant the ability to utilize all that nitrogen to actually produce bushels.”

Learn more in the HAT interview here: Jim-Pullins-Verdesian and at the Verdesian website.

Pullins is a Territory Business Manager for Verdesian.