Each fall we revise and update our Weed Control Guide for Ohio, Indiana, and Illinois (WS-16) publication. This year, in addition to incorporating a few new herbicide names and subtle label change information, we are adding information to the problem weed section on control of Cressleaf Groundsel, Poison Hemlock, and Annual Bluegrass.  Since some of the best control strategies for all three of these weeds involve using herbicides applied in the fall, I decided to use this information in newsletter article. 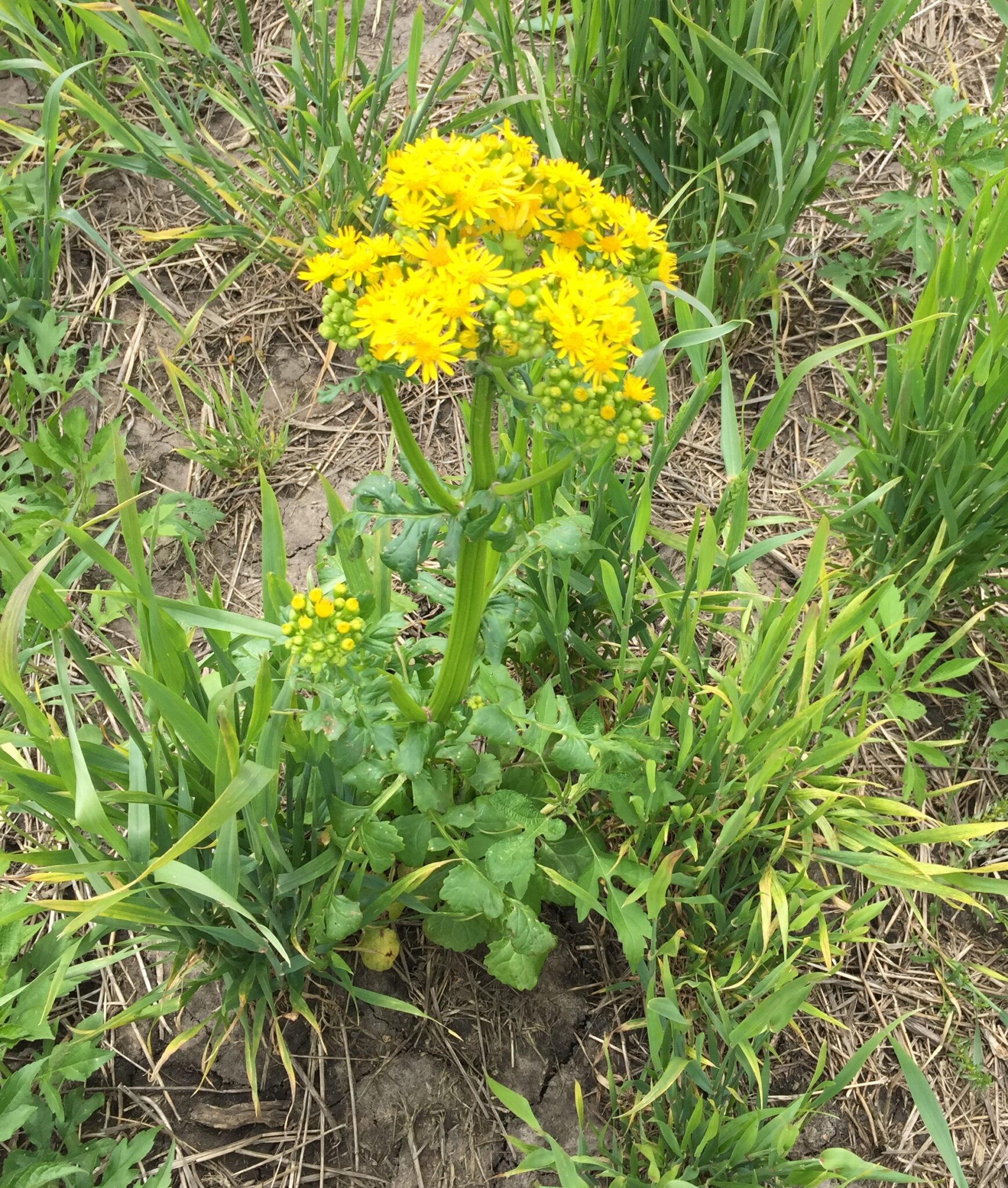 Cressleaf groundsel is a winter annual weed that has become more prevalent in pastures and agronomic crop ground over the past decade.  The small seeds produced by this weed allow it to thrive in reduced and no-till systems as well as poorly established pastures.  Cressleaf groundsel emerges as a rosette in the fall then bolts, flowers, and produces seed in the spring.  Basal rosette leaves are deep pinnate serrations with roundly lobed leaf margins.

The presence of this weed in pastures and hay fields is of greatest concern due to its toxicity to livestock when ingested.  Leaves, flowers, and seeds of cressleaf groundsel contain alkaloids that will cause chronic liver damage in livestock (seneciosis).  Symptoms of seneciosis are loss of appetite, sluggish depressed behavioral patterns, and in extreme cases aimless walking without regard to fences or structures.  Although cressleaf groundsel is not as toxic as many of its relatives in the Packera genus, livestock producers encountering this weed in pastures or hay should take steps to avoid feeding and ingestion by animals.

Fall prior to corn or soybeans.  Apply from early October to mid-November.  Effective treatments include the following:

– combinations of 2,4-D plus either glyphosate, metribuzin, dicamba, paraquat, simazine (corn only), metribuzin, Canopy/Cloak DF/EX (soybeans only), or a product containing tribenuron and/or rimsulfuron (Basis, Express, Audit, Nimble, etc). Maximum rate of rimsulfuron products is reduced prior to soybeans.

– combinations of paraquat with metribuzin or simazine (corn only)

Wheat. Spring application of 2,4-D after full tiller is effective.

Pastures/grass hay.  Small plants in rosette stage can be controlled with mixtures or premixes containing 2,4-D, or a combination of 2,4-D and dicamba, applied to rosettes in the fall or early spring prior to bolting.  The goal should be to control cressleaf groundsel when plants are small, so that they do not get to a size that grazing or harvest in hay becomes a problem.  Plants that are larger, or bolting, are more difficult to control.  Producers should be aware that applications of these herbicides will also kill favorable broadleaves (legumes) that are present in pastures.

Legume hay.  Apply herbicides in fall or early spring when plants are in the small rosette stage.  Herbicide options are limited to Pursuit or Raptor, and the combination of one of these with 2,4-DB (Butyrac).

Poison hemlock is commonly found in pastures, fencelines, and field edges, from which it can move into no-till crop fields.  It is a biennial weed that exists as a low growing herb in the first year of growth and bolts to three to eight feet tall in the second year, when it produces flowers and seed.  It is often not noticed or identified as a problem until the bolting and reproductive stages of the second year.  The alternate compound leaves are pinnate (finely divided several times) and are usually triangular in outline.  Flowers are white and occur in an umbel inflorescence.  Poison hemlock is often confused with wild carrot but can be distinguished by its lack of hairs and the presence of purple blotches on the stems.

Poison hemlock contains five alkaloids that are toxic to humans and livestock, primarily when ingested.  The plant’s alkaloids may also be absorbed through the skin, and cause skin problems on sensitive individuals.  Precautions to take when removing plants by hand are use of gloves and long sleeves.  All parts of the plants contain the toxic alkaloids with levels being variable throughout the year.  Cases of poisoning due to poison hemlock ingestion are rare as the plants emit a musty odor that makes it undesirable and unpalatable to livestock and humans.  Consumption and toxicity in animals usually occurs in poorly managed or overgrazed pastures where animals are forced to graze poison hemlock because of lack of desirable forage.

This plant can be noticed very early in the spring, as it is typically one of the first weeds to green up, usually in late February to early March if temperatures are favorable. Control of poison hemlock with herbicides is most effective when applied to plants in the first year of growth or prior to bolting and flowering in the second year.  The closer to reproductive stages, the less effective the herbicide.

Fall prior to corn or soybeans.  Combinations of glyphosate plus 2,4-D or dicamba are effective, along with dicamba plus 2,4-D.

Soybean. Preplant application of saflufenacil (Sharpen and Sharpen containing premixes) plus glyphosate, glyphosate plus 2,4-D, and 2,4-D plus dicamba will be most effective.  Be aware of preplant application restrictions (days between application and planting) when these herbicides are used in the spring.  Preplant intervals with saflufenacil will vary based on rate and soil type. Preplant intervals with 2,4-D and dicamba will vary based on the soybean herbicide-resistance trait to be planted, and whether 2,4-D and dicamba were applied together.

Wheat. Mixtures of 2,4-D plus dicamba or clopyralid applied in the spring after full tillering will be most effective. 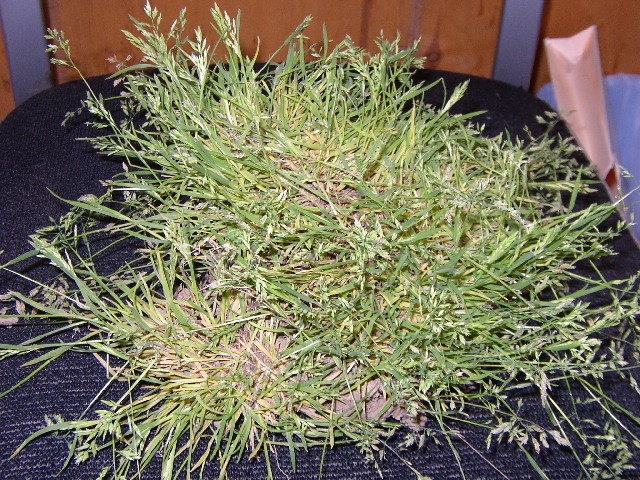 Annual bluegrass, a winter annual grass, is an upright, clump-forming weed that expands through the development of aggressive tillers. It can be particularly abundant in highly compacted, excessively wet soils. Seeds germinate in late summer, early autumn, and spring. It is generally identifiable by its light green leaf blades that are smooth on both surfaces, have two distinct, clear lines on each side of the midrib, and a boat-shaped leaf tip. Annual bluegrass also has a slightly pointed, membranous ligule. A single annual bluegrass plant can produce over 300 seeds that have the ability to lie dormant in the soil for many years.  Annual bluegrass is most easily controlled with fall-applied herbicides.  It can be difficult to control in cool, wet springs, due to reduced herbicide activity.

Fall prior to corn or soybeans.  Application of mixtures containing glyphosate, rimsulfuron (Basis etc), or Canopy/Cloak can control bluegrass.  Paraquat can be effective, but activity is affected by weather.

Soybean.  Preplant application of paraquat, glyphosate or chlorimuron are effective.  Control of annual bluegrass postemergence is accomplished with glyphosate, glufosinate, or one of the postemergence grass herbicides such as clethodim or quizalofop.

Wheat. Annual bluegrass in wheat can be suppressed or controlled with Anthem Flex, Finesse, and Osprey.

Alfalfa. Postemergence grass herbicides that contain clethodim (SelectMax, others) and sethoxydim (Poast Plus, others) are effective on annual bluegrass in alfalfa.  To get the most favorable activity from these herbicides, apply when temperatures are above 60 °F and plants are not drought stressed.

Pastures. There are no herbicides for controlling annual bluegrass in grass pastures that won’t harm the desirable grass forage species.  The best option for pastures is to reseed thin areas and fertilize to promote growth of desirable forage species.