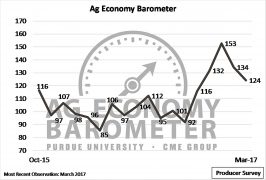 Producer sentiment toward the agricultural economy dropped to 124 in March marking the second consecutive month of decline, according to the Purdue University/CME Group Ag Economy Barometer.

The decrease is a 10-point drop from February’s reading of 134. The barometer is based on a monthly survey of 400 agricultural producers from across the United States.

“The barometer has been moderating in recent months after a large jump in sentiment that began in November 2016,” said Jim Mintert, director of Purdue’s Center for Commercial Agriculture and principal investigator for the barometer. “While sentiment has settled lower, it’s important to note that it is still higher than during all but the last two months of 2016.”

“At 120 in March, the Index of Current Conditions exceeded recent highs and is at a level that we haven’t seen since late 2015,” Mintert said. “Producers’ reduced optimism about future economic conditions in agriculture are what drove this month’s barometer lower.”

Producers’ optimism toward the overall U.S. economy continued to be strong in the March report, a trend that started in November 2016. In October, just 35 percent of respondents said they expected widespread good times in the U.S. economy over the next five years. By December, this number had jumped to 71 percent. It improved again in the March survey, increasing to 77 percent.

“These results are consistent with producer responses to other questions about the U.S. economy,” said David Widmar, senior research associate for the Center for Commercial Agriculture and leader of the barometer’s research activities. “Two examples are that 59 percent of producers said that they expect the U.S. economy to expand and 78 percent expect the U.S. stock market to be higher or about the same over the next 12 months.”

Read the full March Ag Economy Barometer report at https://purdue.edu/agbarometer. This month’s report includes information about farm finances and livestock commodity price expectations. The website offers additional resources, such as past reports, charts and survey methodology, and a form to sign up for free monthly barometer email updates and quarterly webinars.

The Ag Economy Barometer, Index of Current Conditions and Index of Future Expectations are available on the Bloomberg Terminal under the following ticker symbols: AGECBARO, AGECCURC and AGECFTEX.