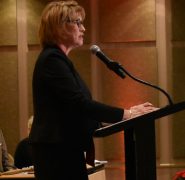 Indiana Second Vice President Isabella Chism was up for re-election at this year’s state convention in French Lick. But, a vote was needed since Fulton County’s Deb Walsh decided to throw her hat into the ring. Following nomination speeches and addresses from both candidates, the vote was taken and President Randy Kron announced a short time later that Chism would be returning for another term. 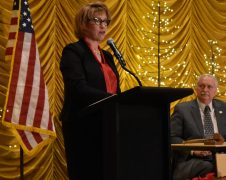 “I take your vote as a vote of confidence,” she said in a brief statement after the announcement. “I also take those votes that weren’t for me as opportunities to look into new things, to listen to your ideas. I think Indiana Farm Bureau has a vision and we know we’ve got the energy and the strength to take the actions that it’s going to take to bring them about to reality. I thank you for the opportunity to continue to work with you to make our vision a reality as we all work together in the next hundred years.”

Both women serve on the American Farm Bureau Women’s Leadership Committee, Chism as the vice chair and Walsh as the Midwest Region representative. Chism, from Howard County, is also the vice chair of the board for the Agriculture Council of America.

She continues serving with Kron, and Kendell Culp, Vice President.