No Deals with China or on the Border Wall

U.S. trade talks with China made progress, while talks at home to end the partial government shutdown—about to enter its fourth week–were stalemated.

China has so far resumed soybean purchases, agreed to cut punitive tariffs on U.S.-made cars, promised to open its markets for more foreign investment, and drafted a law to prevent forced technology transfers.

American Farm Bureau trade adviser Dave Salmonsen says the key for the U.S. side is enforcement of China’s commitments.

“And that’s the real question here, will this be a short-term answer, China will agree to buy some more…the tariffs will go off or be reduced, or whatever they do with that…but will they sit down and actually build the structure to deal with the long-term issues of forced technology transfer and intellectual property protection.”

U.S. negotiators want China to give specific dates for making purchases, and assurances that Beijing won’t hinder U.S. companies from doing business in China. Both sides are optimistic and driven by mounting trade damage from their tariff war, now paused until a March 1st deadline.

But there was no negotiating at home on the ‘border wall’ partial government shutdown, each side digging in further after dueling prime time speeches by the president and Democratic leaders, now blocking most bills in the Senate. 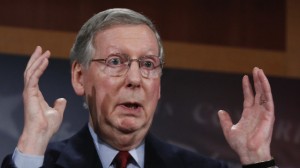 The finger-pointing continued.  GOP Leader Mitch McConnell said, “By very wide bipartisan margins and on multiple occasions, the Senate has cleared, literally billions of dollars in funding for physical barriers along the southern border. Steel fencing was fine, even salutary, when President Obama was in the White House, but it’s immoral when President Trump occupies the office.”

“As government agencies remain shut down, American farmers and small businesses can’t get the loans they desperately need, tourism suffers, as our national parks go neglected, some families can’t get a mortgage to buy a new home.”

President Trump was meeting with lawmakers from both parties, with speculation building he might declare a national emergency at the border and reprogram defense dollars for border wall construction—a move likely to end up in the courts.