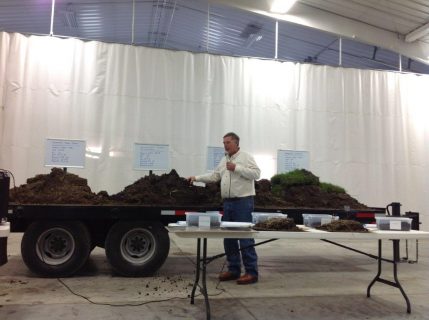 A long and wet fall that carried into the winter has left significant erosion on many fields as we get set for #plant2019. Many are saying that the level of erosion this year is far worse than in years past. That erosion is the subject of this month’s HAT Soil Health Podcast.

Northwest Ohio and Northeast Indiana farmer Allen Dean said he was out flying his drone the other day and, “it was very easy to see where a lot of this water was coming from some of the neighboring fields and we’ve been able to track it right down to the creeks and streams. We have cover crops growing out there and some of our cover crops aren’t that great this year just because of the wet fall we had last fall, but they continue to do a lot better than fields that have been tilled or fields that have absolutely never had cover crops on them.”

“Where we had previous heavy residue from the previous year, with primarily cereal rye, that heavy armor on the soil really did protect that soil. It helped break, I think, a lot of that rainfall and slowed up the water movement. We’re seeing a lot of benefit from previous years cover crops from the residues still laying on the ground.”

Dean is significantly ahead of some of his neighbors who still do traditional tilling. One neighbor, Dean said, was gullied out 18-20 inches across the farm. Dean is joined by Indiana Agriculture Nutrient Alliance Executive Director Ben Wicker on this month’s podcast.