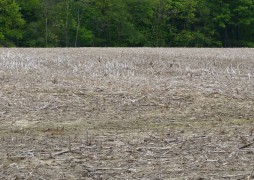 Planting progress for Indiana corn and soybean producers is a slow ride this year as the pace lags behind the 5-year average. In the Terre Haute area, it’s been untimely rains of less than an inch just as the fields are about ready for the planter. That’s what has Brad Burbrink sitting and waiting to turn the first wheel in the month of May.

“We had a good run there in April and got 30-40% of the corn planted. Since that time we’ve been able to do some different things in the fields, but no planting has really taken place since then,” he told HAT.

Although he is behind the planted corn looks to be in good shape.

“I’m going to say 30% of the corn we planted is up and honestly looking pretty good. It’s up to V3 and has a uniform stand, and that’s sort of thing. Now the last 10% we planted was the last day we were able to work before the last three weeks of rain, so I think that ten percent is going to have to be replanted. It’s had a challenging life. In the high spots it’s up nice and in the wetter spots it’s trying to come. But it’s to the point now if we get some weather we’re just going to have to start over on those acres.”

Fields treated for weeds look ok right now, but the wet, untreated fields are a cause for concern.

“Giant rags are getting some size to them,” he said. “That shouldn’t be a problem but if we continue another ten days they’ll be pretty big and kind of off label of a lot of different herbicides. So they could become a challenge but nothing out of the ordinary I guess.”

Burbrink has about 10% of the soybean seed in the ground and due to the lateness in planting and the current strength in soybean prices Burbrink will likely switch some corn acres over to soybeans.