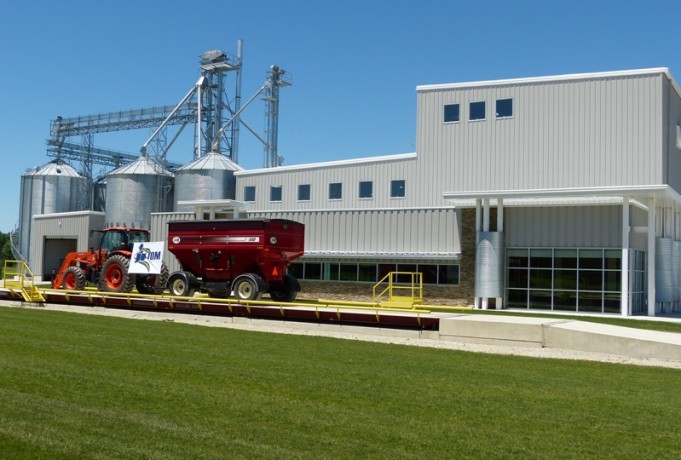 The 2015 Purdue Farm Management Tour is underway in eastern Indiana, with stops in Jay and Adams County. The tour kicked off at IOM Grain in Portland Tuesday, a soybean processing operation that finished construction a little over a year ago and is already slightly over capacity.

And ship around the world this Portland, Indiana company does. He says there are domestic and international customers, and a nice percentage is domestic, “but our span has been from Eastern Europe, all across the U.S., Mexico, South America and Asia, and Asia is a personal favorite of mine. They consume the most soybeans in the world.”

IOM Grain stands for Indiana, Ohio and Michigan, the region in the world that grows the highest quality soybeans. That helps create a premium for local growers’ beans for processors like IOM.

“The Indiana, Ohio, Michigan area right along the state line from about I-70 north is recognized worldwide for its high quality soybeans, high protein, high oil content and good size. If you compare us to Missouri beans and you ask a customer which they would pick, they’ll pick the IOM bean any day.

These beans are all non-GMO because that’s what Loucks’ customers desire. He told HAT many of their farmers grow both the non-GMO soybeans in addition to commodity soybeans. They’re receiving a nice premium to grow for IOM.

Over 200 farmers are under contract with IOM to grow 40,000 acres within a roughly 100 mile radius of the plant. Loucks says they’ll continue to grow in the current location with the expected growth in demand.

Hear more in the HAT report from Portland:IOM Grain