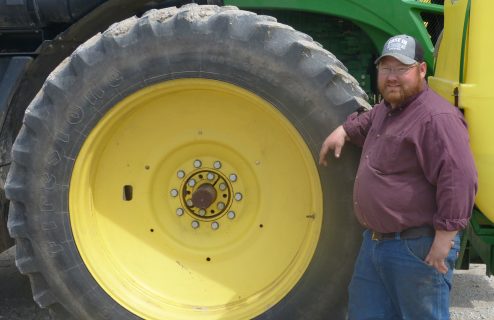 Harvest may begin as early as this week for many farmers throughout the state. However, heavy rains and flooding in Northwest Indiana at the beginning of planting season put farmers in that area behind much of the rest of the state. How far behind are they?

According to Marshall County Farm Bureau President Charlie Houin, “Usually we start harvest around September 20th and that’s about where I think we’re going to be just with the late planting dates. We’re still looking at beans that are still putting pods on and still getting some height to them.”

Houin told HAT that he had to do his planting in three stages from the beginning of May through June 3rd when they finished. He said they were in planters every 1-2 weeks during that time as weather allowed. He said he was fearful he’d lose some crop during some drought issues in June, but he said he’s been very impressed with the genetics that pushed them through the dry areas. As for projected yield, Houin says, “It’s really hard to determine yields up in our area because we did have drowned out acres. Zero acres really throws our average off. I’ve seen some fields do really well and some fields do really bad. Overall, I’m thinking that we’re going to land on our average yields up in our area. About 55 bushels per acre on beans and then about 175 (bpa) on our corn.”

Houin projected that about 5% of his farm was flooded out this season. Contributing to that flooding was action taken by the Indiana Department of Natural Resources when the Kankakee River came out of its banks. Houin says they are making progress on that issue.

“We’re working with them on the Grand Kankakee Marsh. We’re really excited about that project and we hope to get that project moving where we can get some of our flood waters off our fields a little bit quicker. And holding the DNR accountable and IDEM accountable for their actions where they actually back up water onto farmers because they don’t allow us to remove logs from our rivers.”