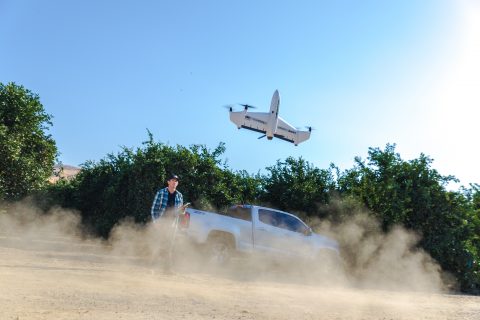 It wasn’t just the big tractors and planters on display at the National Farm Machinery Show in Louisville. Drone technology is becoming more and more prevalent on the farm as data becomes such a valuable tool. Jeff Dickens is with AeroVironment, a drone company offering not only the equipment but the software to decipher what your drone is showing you. He knows that farmers like to wait until technology has been tried, tested, and is true before implementing it on their operation. He told Hoosier Ag Today that with their new drone, the Quantix, there’s no more need to wait.

“The technology is here today and it’s sustaining future endeavors. We’ve got it set up where software updates. We can update our camera settings, our flight patterns, things of that nature, to where it’s not going to be like your cell phone that’s here today, gone tomorrow, and another one is introduced six months later. We designed it purposely to last and be upgradeable without having to throw anything away.”

And they don’t just hand you the drone and tell you, “Good luck!” Dickens says they’ll help you analyze the data with their new software, the AV Decision Support System™, which can show you all of the data needed to make better business decisions. They are currently beta testing plant count that will eventually quantify stand count and plant emergence.

As for flying the drone, Dickens says, “Once you tell the drone, ‘Here’s my flight area,’ it’s going to launch, fly the area, come back, and land 100% on its own to where your main job at that point is the survey the airspace and watch for other aircraft.”

Dickens says that the information you get from your flight, good or bad, is incredibly valuable.

“Knowing that you’re doing it right is just as valuable as having a map that might show some hot spots and stress and showing poor NDVI readings. You know when it’s bad you need to go do something, but it’s also nice to know that you are doing it right.”

Their packages begin at $5500. You can find more info at avdroneanalytics.com.