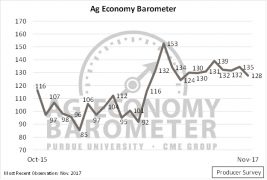 There has been a drop in farmer sentiment in the newest Purdue University/CME Group Ag Economy Barometer. The 7-point drop to 128 is the second-lowest reading of 2017 and one of the two barometer sub-indices is the main driver. Jim Mintert from Purdue says thoughts about the future led to the drop.

“It’s people’s less optimistic perceptions about the future really,” he said. “If you look at the Index of Current Conditions, it was steady, actually a very slight uptick, but the driver was a drop of about ten points in the Index of Future Expectations. It’s a little unclear as to what exactly motivated that, but people became just a little less optimistic looking out roughly twelve months ahead about where the ag economy was going.”

The new barometer comes at the conclusion of harvest. Mintert said they did not ask a specific harvest question this month, but harvest results could have contributed to the decline.

“Overall, I think people were pretty optimistic following the conclusion of harvest, but there were some locations where yields were certainly not as good as some people had hoped. Of course, compared to a year ago, yields in many locations were lower than what they were in the fall of 2016. So, that might account for some of the reduction in optimism with respect to where we’re going in the ag economy over the next year or so. Obviously, prices are not as strong as people would like as well, so those are two factors that maybe come into play. Clearly a little bit of a shift, but I don’t want to overplay that too much.”

Sixty-two percent said they thought the next 12 months will be bad times financially in U.S. agriculture. But, Mintert added producers remain more optimistic than they were before the fall 2016 elections.

Mintert is the barometer’s principal investigator and director of Purdue University’s Center for Commercial Agriculture.

The 400 producers surveyed for the November barometer were also asked about trade, NAFTA in particular, and farmland values. Hear what Mintert says they learned:News-Makers-with-Jim-Mintert-on-November-Ag-Economy-Barometer