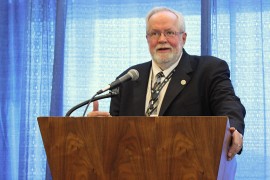 The National Pork Producers Council says new rules issued by the Department of Agriculture could restrict the buying and selling of livestock and lead to consolidation of the livestock industry. USDA’s Grain Inspection, Packers and Stockyards Administration released three rules Wednesday, including an interim final rule that changes legal thresholds in the marketplace. NPPC CEO Neil Dierks says the change is harmful to pork producers.

“The concern with this for pork producers is how buyers will react to this change in the liability issue,” he said. “With that the impact is it could very easily drive more vertical integration, take away opportunities from pork producers, in an atmosphere where we need more opportunities and we need producers to have the ability to do what they do best, which is raise hogs and produce pork.”

The interim final rule will go into effect after a 60-day comment period. USDA also released two other rules dealing with differential pricing and a rule regarding the poultry industry. Dierks says the interim final rule causes the most concern of the three issued by USDA…tape

“This is the rule that changes the legal threshold on a Packers and Stockyards Administration suit on the 1921 act. It’s the one that’s going to create a lot of uncertainty on the legal aspect, and you’re going to get buyers that are going to react to reduce their liability exposure and with that potentially take away opportunities for performers and producers.”

He says the change in liability could negatively reshape the pork industry, if the rule moves forward, and Dierks adds NPPC is looking to Congress and the incoming Donald Trump administration to address the last-minute rules issued by the Obama administration.