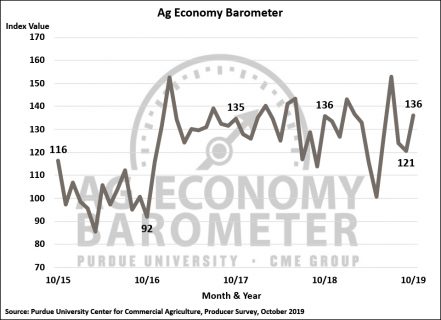 The October reading of the Purdue University/CME Group Ag Economy Barometer has increased from September 2019, but the reading of 136 is at the same level as it was in October 2018.

The October reading of 136 is a 15-point increase from the September reading of 121. Researchers say it was driven by an improvement in sentiment of current and future economic conditions in agriculture.

According to the report, the Index of Current Conditions rose to 115 in October, a 15-point gain from the September reading of 100. The Index of Futures Expectations also saw an increase of 15 points to a reading of 146.

There was also a more favorable outlook to making large investments in October compared to September. The Farm Capital Investment Index saw a 12-point gain to a reading of 59. In May, the index dipped to a low of 37—the lowest reading since the barometer began.

There is optimism surrounding the trade agreement with China. One of the survey questions producers were asked was, “Do you think the trade dispute with China will ultimately be resolved in a way that benefits U.S. agriculture?” 75 percent of producers believed it would be beneficially resolved compared to 20 percent who did not think it would be resolved.

The Ag Economy Barometer is based on the results of a phone survey of 400 U.S. crop and livestock producers and was conducted from Oct. 14 to Oct. 22. For the full barometer, click here.