Officials from Mexico and Canada Discuss Importance of NAFTA

Mexico’s chief NAFTA negotiator and Canada’s top agricultural official say their countries remain committed to completing the North American Free Trade Agreement renegotiations, no matter how long that effort may take. They both addressed the 22nd World Meat Congress in Dallas on Thursday. 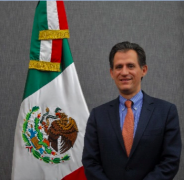 Kenneth Smith, who heads NAFTA negotiations on behalf of Mexico, says the negotiations that started in August have made progress in many areas.

“I would say to a degree of 70-75 percent of progress in all that modernization agenda. We still have the tougher issues that are being discussed at the ministerial level on issues the US has put on the table on automotive rules of origin, dispute settlement, and the “sunset clause”. These are, by the nature of the difficult type of negotiation on these issues, they will go on till the end.”

Mexico will first elect a new president in July, a date negotiators were hoping to avoid. Smith explains how Mexico’s elections could impact the NAFTA negotiations and the ratification process.

“There are several scenarios. One is that we conclude before the transition of power. In which case the new administration will have to decide whether that package is satisfactory for them and to take it to the Mexican Senate for approval, or if we haven’t finished the negotiations, it will be up to the new administration to continue where we left off on November 30. The main presidential candidates have all talked about the importance of NAFTA and the benefits that has brought to our country.”

Mexico and Canada consider the recent steel and aluminum tariffs a separate trade issue that will be addressed outside of NAFTA.

“We are the second purchaser of steel products from the US. So, in fact, there is a large surplus the US has with Mexico; therefore, we contribute to US national security when it comes to the steel sector. So, we have rejected the investigation from the beginning. We have clearly stated that there is no linkage with this investigation with the NAFTA negotiations despite all the comments by members of the US administration.”

By Thursday afternoon, Canada had announced up to $16.6 billion of retaliatory tariffs on U.S. steel and aluminum, along with select prepared meals, maple syrup and whiskies, to name a few. Another official from Mexico says U.S. pork, steel and other products will be subject to retaliatory tariffs.