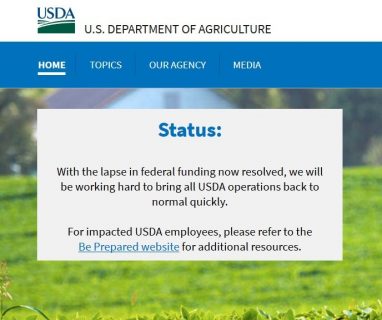 The government shutdown temporarily stopped USDA from issuing the large number of reports it generates on a monthly basis, and commodity markets felt the impact. Lafayette, Indiana broker and analyst Bill Gentry of Risk Management Commodities feels the impact grew as the shutdown lengthened, “because we really had no stakes in the ground to work or reference from,” he said. “So, one of the things that’s going to be very interesting is this Friday we’re going to get a Commitments of Traders report and we haven’t had one for three weeks. As we’ve seen over the last several weeks when they were still publishing those numbers, the trade had mis-estimated those by quite a bit. So, if that’s the case, after three weeks we could really be off and that could shock the market pretty hard. So, volatility is likely to increase through the course of this week in anticipation of next week.”

Joe Vaclavik, Founder and CEO of Standard Grain in Chicago, says the markets really miss important data from a variety of reports, domestic and foreign.

“USDA is generally considered to be the gold standard when it comes to reports, and you’ve got to remember how much we’re missing here. The obvious things we’re missing, weekly export sales reports, daily flash sale reports, your monthly WASDE reports. And we’re missing reports from overseas, the Foreign Ag Service offices.”

Those reports are expected to now flood the market with the government shutdown over, including the February supply and demand report and the final 2018 crop production report coming as scheduled February 8th. Vaclavik says the overseas information is extensive and quite valuable to the markets.

“There are a lot of things we’re not privy to during a shutdown and it would be really nice to see as CFTC report. It would be really nice to see some stuff from the FAS, especially out of Brazil and out of Argentina and get their take on it. Yes, it has affected the markets and I think if it’s resulted in anything at this point it may be a slowing in volatility just because we don’t have those reports.”

Gentry, in addition to looking forward to the new data is still concerned about what happens come the middle of February.

“The real problem that I see is are they going to stay open after the 15th, because at this point in time I don’t see the two sides coming together to meet in the middle.

Gentry remains somewhat optimistic this can all be resolved, but he doesn’t see it happening just yet.”