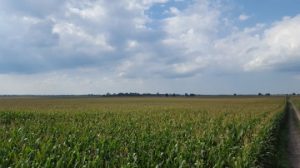 In the August crop report, the USDA estimated Ohio corn yield at 171 bpa, a 12 bpa jump from the 2016 crop. This week the Ohio Ag Net and Ohio Country Journal set out on a statewide crop tour to assess Ohio yield expectations.

On the first day of the tour, they reported on the I-75 leg, in Defiance County, “In a field that looked better than some of the surrounding fields, we noticed corn that was stressed out and in need of water. The disease pressure from gray leaf spot and common rust and northern corn leaf blight was evident. We found a yield of 154.”  In Williams County, they found a field that was estimated at 212 bpa, but a Fulton County field came in at 187 bpa.

From the I-71 team, the pattern of extreme variability continued. Huron County posted an estimate of 231 bpa, while Wyandot County was estimated to yield on average of 173 bpa. The scouts observed most of the fields were in need of rain, “This soil needs some moisture. Deep cracks tell that story.” The tour will continue on Thursday.

Tom Fritz, with EFG in Chicago, said tours like this one and the Farm Journal tour next week will be getting a lot of attention as there is widespread distrust in the yield numbers released by USDA last week.  “According to my analysis of the past few years, the Pro-Farmer tour has tended to show lower yields than the USDA August report. Thus, I would expect next week for the tour to show much lower numbers than we got last week,” Fritz told HAT.