Oil futures pulled back from session highs above $62 a barrel on Wednesday, but the U.S. benchmark still marked a high for the year after government data showed that crude inventories fell unexpectedly, for the first time in 17 weeks.

June crude climbed by 53 cents, or 0.9%, to settle at $60.93 a barrel on the New York Mercantile Exchange. It climbed to highs above $62 before and shortly after the supply data, but prices settled below the session highs following a 25% climb in April.

Given recent gains, it’s “inevitable to see some profit-taking at this point, and some may doubt prices could continue to increase at a similar pace,” said Richard Hastings, macro strategist at Global Hunter Securities. The “market is trying to figure out how much is U.S. dollar driven, and how much is oil fundamentals.”

Analysts polled by Platts forecast a crude-stock climb of one million barrels. The EIA hasn’t reported a fall in crude supplies since the report covering the week ended Jan. 2. The American Petroleum Institute data Tuesday showed a 1.5 million-barrel fall.

The market has been waiting for data to show a decline following 21 weeks of dropping numbers of active U.S. rigs drilling for oil. 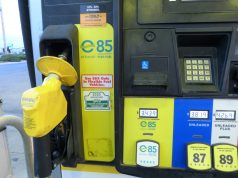